Tourism grows in Kiruna but is fairly low-key compared with many parts of the world. It’s still possible to come here, do your own thing and feel as if you’re alone in the landscape.

There are plenty of ready prey, though, for the Northern-Lights-Husky-Dogs-Snowmobile-Sami trips. That’s not to say that none of these activities are worth doing, but they’re beginning to blur rather, as people want tours that tick off as many things as possible in one evening.

Meanwhile we’re still enjoying what Kiruna has to offer for free. A day of sparkling sunshine in February sends us out onto Lake Torneträsk, to walk on the ice and marvel at the soft white mountains hanging in a blue sky.

We’re particularly enjoying it right now because for a few days last week we felt we’d lost winter. It was plus 6 degrees for days, the top layers of snow melted and roads and pavements became a mass of gritty grey ice and slush, later turning to slippery ice. It was hard to appreciate the warmth of the spring-like sun, when the result was the loss of so much beauty.

But right now winter has returned. It was minus 30 out on the lake yesterday and feeling too cold to stop, too cold to face the wind, too cold to be long out of the sun.

The conditions are familiar, and appear normal for winter, but there’s hidden damage from the recent warmth. In our driveway a slippery layer of ice lies underneath the snow so we have to be careful not to clear too much snow away or we’ll be driving on an ice rink. More seriously, in the landscape the ice layer under the snow prevents reindeer reaching the moss, their main source of food. They have very agile feet to push away snow, but they can’t break through ice. Their owners have to bring the whole herd together in large fenced areas and provide them with bought feed. 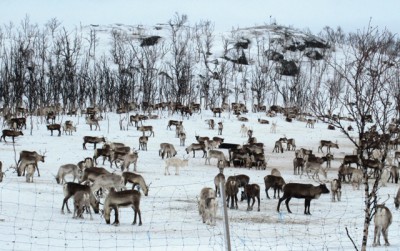 It’s tough on the reindeer, obviously, who can no longer graze where they want, and it’s tough on their owners, who have to work harder to keep their animals alive. But there are pay-offs elsewhere.

For one thing it’s much easier for us to encounter a large herd of reindeer. Yesterday we spotted a herd being fed near the main road to Norway. Reindeer herds look like hundreds of rocks until you come closer and see the antlers. I’ve always thought they were beautiful animals, so it was a treat to be able to observe them there when we stopped the car and wandered over to the fence.

There was another treat, and, apparently, another pay-off nearby. A hawk owl, balanced on the top of a spindly birch tree, also observing the reindeer. The patterned grey head was swivelling 360 degrees and the eyes glinting in the sunshine. At first I thought I was just lucky, to encounter an owl near a herd of a reindeer. Then I thought, owls eat lemmings, and lemmings probably like artificial reindeer feed. The owl got a lemming pay-off from the layer of ice.

So there we were, watching the hawk owl watching the reindeer. Those were our pay-offs. Meanwhile – who was watching us?

A van screeched to a halt in the lay-by and a couple of people climbed out with huge zoom lens cameras dangling from their necks. I guess they’d seen us, looking at the owl. They wanted those pictures too.

And – who was watching them?

A tour company perhaps, wondering if there was now a demand for bird-watching in their tour schedule. 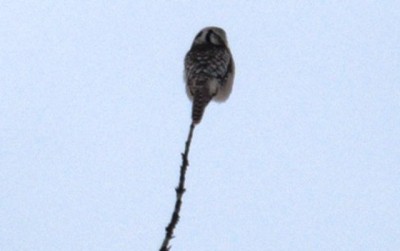