Every picture tells a story (but not always the real one) 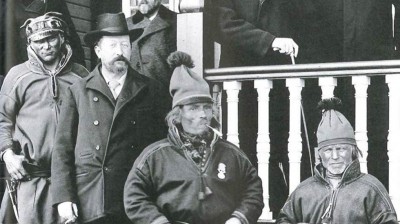 It’s controversial, the setting up of a mining area. Back in 1900 when the big mine was started in Kiruna, people seemed to be able to do what they wanted. It was a challenge in terms of economics, transport, communications, climate, landscape – you can read it as quite an adventure story in a kind of ‘wild west’ frontier environment. On the other hand, the damage done to the landscape and the disturbance to the Sami reindeer herding community was enormous.

In our understanding of this history, one figure is in the foreground – the mine’s first director, Hjalmar Lundbohm. He made all the decisions about developments. He wanted the town to be an ‘ideal society’, with health and social support systems and high living standards, and he seemed to achieve this. It had electricity. Trams took workers to the mine. There were schools. There were public buildings. There was an impressive church. In later years mine wages were above the national average. People came from all over Sweden to work here – it was the city of the Future.

In Kiruna we’re familiar with Lundbohm’s portrait. There are photos of him with workers’ children at Christmas. Photos of him with local Sami, sharing a meal in a hut or out in the wild together. We know Lundbohm argued in wider political circles for Sami herders’ rights, and took an interest in their lives, encouraging research and publications on the subject. He refused to live in a grander house, preferring to look approachable, a man of the people. He was sometimes indistinguishable, it is said, from his workers, and he had to tell them that he was actually the manager.

He could read a situation and knew how to play it to his advantage, how to get the people with the power in southern Sweden on his side. He had friends in high places, knew famous artists, even entertained royalty. He also liked more informal gatherings, to talk and eat with the locals, who were free to wander into his house as they chose. In the early days he needed Sami guides, and he used Tornedal settlers to navigate the difficult rivers he needed to travel on before the railway was built.

So while we know the mining company was ruthless in its exploitation of the area, Lundbohm himself is viewed by us in Kiruna as someone who in the circumstances did his best for local people and is very much admired, even now.

This Christmas I was given a recently published book, ‘In the Director’s Time: Lundbohm’s view of the Sami and Tornedal minorities in Kiruna’ by Curt Persson. I’ve already read widely on Kiruna’s early history, so reading another slim volume on the mine’s first director I wasn’t expecting any surprises.

This is what I learnt:

Lundbohm was an early supporter of race biology. He supported the idea that there were lower classes of people who should be kept separate from the pure Nordic race. He used these people to get a foothold here, and then refused to employ any of them – instead importing workers from ‘better’ races elsewhere in Sweden. He promoted the idea of keeping the Sami separate, uneducated, and nomadic, and away from Swedish society. He desecrated Sami sites by collecting sacred stones. He described the Tornedal Finnish farmers as encroachers on the land, a threat to the Sami, and comparable to the much-hated wolf. He supported researchers to measure the heads of Sami and Tornedal people, researchers who defined the physical characteristics of the Sami and Tornedal Finnish as ‘degenerate’, and he arranged for archaeologists to dig up the floor of a local church to measure skulls buried there. He socialised and corresponded with ardent race biologists who would later be key anti-Semites in Swedish society.

Suddenly, Kiruna’s early history and Lundbohm’s place in it starts to look rather different. His prominent position gave authority to his comments and opinions throughout the rest of the country, and he wrote and corresponded widely on the detail of the lives of the existing communities here – the Sami, and the Tornedal or Finnish farmer settlers. These ideas were around in Swedish society at least until the 1940s, and although race biology has since then been widely discredited, I wonder whether anything has replaced this early writing, correspondence, and law-making, all of which came from the time of Hjalmar Lundbohm. Isn’t there still a lot of ignorance about the history and culture of people living in the far north of Sweden? I know when I lived in Stockholm I never came across anyone living there who had ever been to Kiruna.

Public relations is important for the mining company, and Lundbohm, ‘man of the people’ has been its figurehead. They’ve recently moved his old home to their land at the foot of Luossavaara where they’re building a new ‘company area’.

Where Lundbohm’s home used to be, land threatened by the mine, there’s now a park, and they’ve erected presentation boards with photographs of earlier times. In pride of place is a giant photograph, an image of Lundbohm standing outside the company’s hotel, next to a number of Sami and some Tornedal farmers, on the occasion of a meeting of the local parish to establish the use of land in Kiruna.

Unfortunately I now know that at this meeting the Sami had no voting rights at all, the Tornedal farmers had one vote, and Lundbohm had one hundred votes. It rather changes the feeling of the image.