Words in the air

Kiruna is on the edge of an area known as ‘Tornedalen’. This region extends from Sweden into Finland (that part was given away by the Swedes to the Russians after losing a battle). The cultural identity of the region is still visible, and although strictly speaking Kiruna isn’t in Tornedal, there are many people from the area living here.

Tornedalen has it’s own language – Miänkieli – a Finnish-based language which has a recognised status as one of Sweden’s minority languages. As with many languages it comes with a pattern of thinking, an approach to life. Tornedal people have traditionally lived in difficult conditions, in small communities, frequently exposed to travellers, in close cooperation with local Sami people, and sometimes in conflict with the authorities. Their approach to life has often been expressed in stories, sometimes in song.

The stories are usually humorous and ironic and it’s hard to pinpoint what, exactly, makes them so ‘Tornedal’. Here’s an example.

Last week in Kiruna, a local musician, Daniel Wikslund, was telling an audience that he’d recently been in a much warmer country. ‘People always want to know what it’s like to live in the cold,’ he said. ‘I told them temperatures of minus 40 degrees can happen and then we tend not to wear flip flops. It can be very quiet in such cold, but wonderful. It’s so cold that things happen.

‘Have you heard about the experiment you can do in freezing conditions? You throw boiling water into the air and the water freezes into particles before it comes down again? Well, (he said), it’s like that with other things too. When you speak in the cold temperatures, the words come out but then they hang there in the air, in giant frozen speech bubbles. These bubbles hover around – you can feel them there, if you reach out with your mittens. Then much later, when the spring winds come and bring the warmer air, and the birds arrive from the south, then the bubbles begin to melt and the words get released. It can happen anywhere. You can be walking past an empty bus stop and suddenly you’ll hear talking, but there’s no-one there! Everywhere, lots of words in the air!’

The audience was quietly smiling, but not laughing. They knew that though this sounds like a fairy story, at another level it’s true. It’s very quiet here in the winter, and it can feel like people hold back from talking. But then later, when it’s warmer, people warm up too, and there’s more talk in the air.

‘So that’s the reason why people in this part of world never talk behind other people’s backs – because you never know when, or where, those words are going to come out.’ 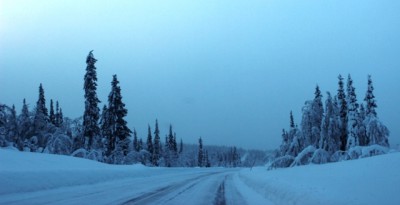